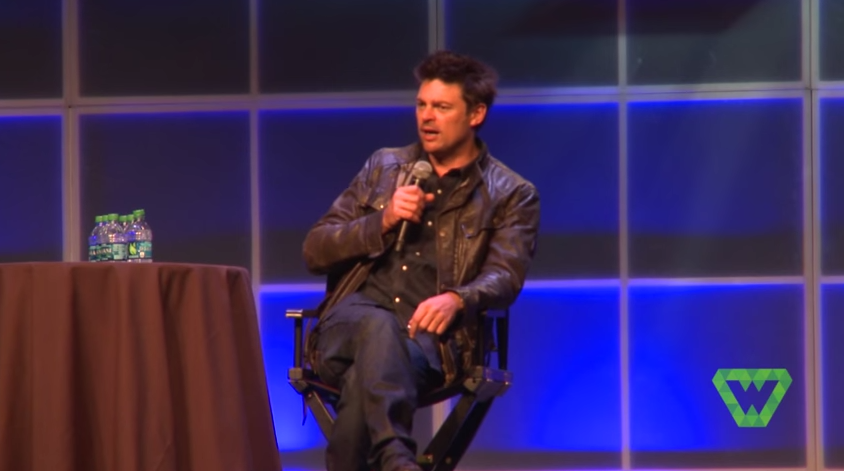 Born in Wellington, New Zealand, Mr. Urban brought his deep, commanding voice to the stage of Salt Lake Comic Con. His wisecracking character enveloped the crowd with fast paced zings and deep answers. Karl showed his lifelong love of all things science fiction and fantasy. He fielded questions ranging from Star Trek to Lord of the Rings. Will he be the next Dr. Who? How about starring in Star Wars?

Since beginning his major acting career in 1991 with the TV series, “Shark in the Park”, Karl has appeared in well over 40 TV series, video game, and movies. A brief list of these appearances would include, “Hercules: The Legendary Journeys”,” Xena: Warrior Princess”, “The Lord of the Rings” Trilogy”, “The Chronicles of Riddick”, “The Bourne Supremacy”, and in the J. J. Abrams reboot of the “Star Trek” movie franchise. Karl has also taken the leading roles of the “Dredd” movie and his own TV series, “Almost Human”.

Here’s a bit of trivia about Karl’s acting abilities. After his first appearance as Leonard “Bones” McCoy in Star Trek, it was rumored that he had found a way to actually channel the spirit of DeForrest Kelley. His performance was so convincing that Leonard Nimoy (who starred alongside Kelley in the original series and films) was reportedly moved to tears.

In April 2014, Salt Lake held its first Comic Con FanX. The Fan Experience brought in many guests, artists, and celebrity visitors. As a result, over 100,000 excited people attended the quickly growing convention in the heart of Salt Lake City, Utah. Making it the 3rd largest Comic Con in the world. We appreciate Karl Urban taking time away from his family to visit our city and spend time with his fans.